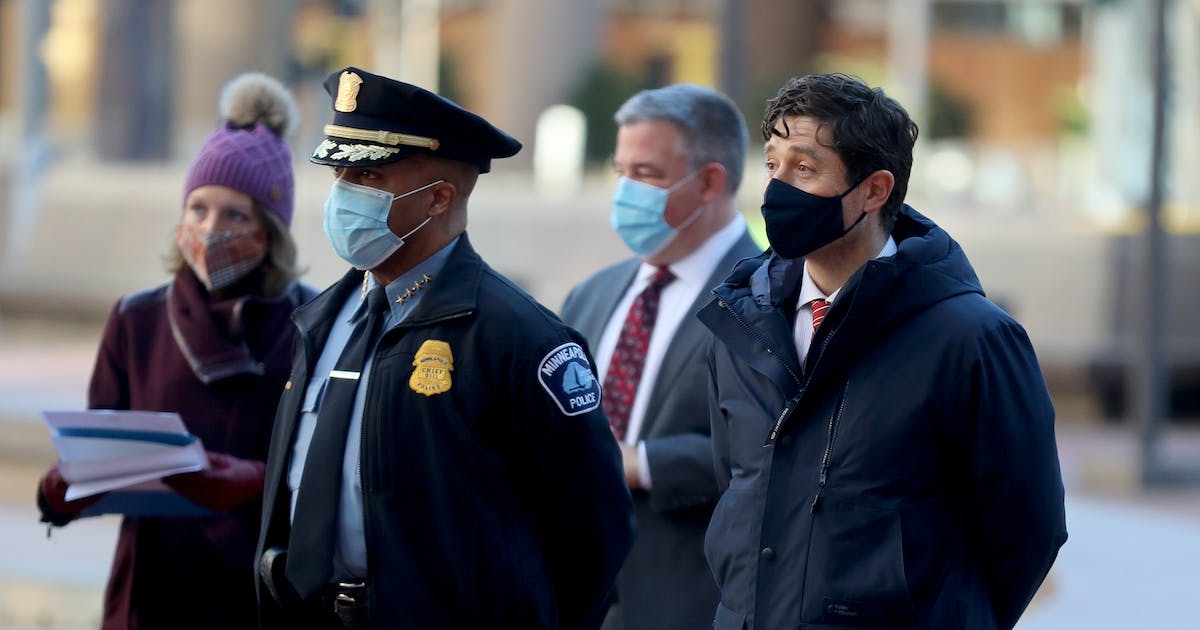 Minneapolis Mayor Jacob Frey worked hard to persuade a divided City Council to sign off on a nearly $500,000 plan to bring in outside law enforcement officers to help Minneapolis police fight a crime wave.

But after one department said it didn’t have the manpower and contract negotiations with another dragged on, the Joint Enforcement Teams never formed, and the city didn’t spend the money.

Now, if the mayor wants to create the teams in 2021, he will need approval from City Council once again.

“In the immediacy, we are getting help” through other mutual aid agreements, Frey said in an interview this week. “We will receive help if we need it. The issue is the longer-term and sustained approach.”

Late last year, as the city struggled to combat a dramatic increase in violent crime and a wave of officer departures, Frey asked the council to sign off on a plan to work with the Metro Transit Police and Hennepin County Sheriff’s Office. It called for the city to spend $496,800 between Nov. 15 and Dec. 31 to form the Joint Enforcement Teams to target crime hot spots.

The city has used the teams in the past, including in the summer of 2014, when they were brought in to help on the North Side during a violent crime wave.

Typically, Police Chief Medaria Arradondo has wide latitude to work with city attorneys to enter aid agreements with other agencies, but this one required council approval because the money was coming from the city’s contingency fund.

Though once considered a fairly routine request, this one drew intense scrutiny from City Council, a majority of which had announced plans to end the Minneapolis Police Department after George Floyd’s death.

In one of their tensest confrontations, some council members pushed police Arradondo for a more specific plans about how he would deploy the officers, while Arradondo urged them to approve the funding, saying, “Resources are hemorrhaging. our city is bleeding at this moment.”

In November, the council voted 7-6 to approve the funding. But a spokeswoman for the Metro Transit police said afterward they didn’t have the capacity to help.

Conversations continued with the Hennepin County Sheriff’s Office. Sheriff David Hutchinson said in an interview this week that his office, and county attorneys, are continuing to talk with the city about potential contract terms.

In the interim, they have continued to provide assistance to the city in other ways, including helping with an effort to crack down on a rash of carjackings.

“At the end of 2020, we were out doing extra enforcement in Minneapolis, we just didn’t have the contract in place,” Hutchinson said.

Contracts on these types of arrangements typically govern a variety of terms, such as the number of officers that will be provided, the type of work they’ll do and the rate at which the city would reimburse the county. They could also include language outlining who would be liable if something goes wrong.

“We’re committed to helping any city in the county that needs help. That includes Minneapolis,” Hutchinson said. “We’ll help where we can, no matter what, it’s our responsibility. But, the contract would make it easier. I’m hoping the City Council does the right thing and makes sure that people are safe.”

It’s unclear precisely how or when the issue might come before City Council again.

Council Member Linea Palmisano, one of the council’s strongest proponents of the teams, said she’s most concerned about figuring out how the police department can access money in a reserve fund that was created late last year, during the city’s budgeting process. The money in that fund could offset cuts made to the police department’s budget, but the council must sign off on its release.

That reserve fund contains $5 million currently earmarked for two police recruit classes and for officers’ overtime. The city anticipates an increase in officers’ overtime, noting that between resignations, PTSD claims and other forms of leave, it is effectively down more than 100 officers.

Palmisano wonders if they could make changes that would allow some of the money currently reserved for overtime to be used for Joint Enforcement Teams or other similar efforts.

“I would prefer, as somebody who cares about the wellness and health of employees and their ability to show up in a clear way for residents, that we aren’t super overworking our staff,” she said. “I would rather use, if available, additional capacity without it becoming somebody else’s overtime problem.”